The Two Guys who had Everything in their Hands

Being a perfectionist, especially when it comes to travelling, my Bua had done her research about Bangkok. And she knew that whatever else we might do, we must visit the Reclining Buddha Temple. Since my movement was going to be restricted for my entire stay in Bangkok after October 19, we would have to visit the temple within the following two days. It was also essential according to both the women accompanying me, to seek divine blessings before the 19th, for the 19th. 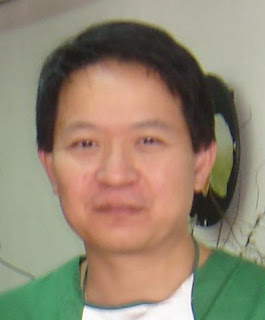 morning, the driver was there again to take me to Dr. Chettawut’s clinic where I met the Man himself for the first time ever, and if a sweeter doctor than him has been created by the Almighty, I haven’t met them! I still remember how soft his touch was, as we shook hands, and how patiently he listened to my queries and concerns and explained to me how he would go about the surgery. To be very honest, I wasn’t listening or trying to comprehend much. I knew that THIS was IT! There was no turning back from here or going anywhere else now. I just had to surrender myself to this man and let him do exactly as he plans.

He told me that for two days now, I had to be on minimal diet and only liquid at that. Besides that, I was given a kind of solution which I had to drink twice to completely clear my bowels by the time it was the D-Day! After my physical examination and the paper work, Dr. Chettawut promised to meet me on the 19th evening, by which time, I would have been admitted to the hospital.

It was clear now that if any site-seeing had to be done, it would have to be done today, because I wouldn’t have much energy to travel around on the 18th. No solid food for 2 days, remember?

And so, we set out to look for the Reclining Buddha Temple (Wat Pho). And since saving money was our first priority (the trip was anyway costing us over 5 lakhs), we opted for the city bus instead of a taxi. And in retrospect now, that was a very good idea.

It didn’t seem that way in the beginning though. We boarded two wrong city buses initially, thanks to the miscommunication with the locals. Hardly anybody understood English. And actually, we still don’t know whether even the third bus we took was the right one or not. We don’t, because something else happened on this bus which changed our entire plan!

At one of the bus stops, a Sikh gentleman boarded the bus [As we were to discover later, a lot of Sikh businessmen make frequent trips to Bangkok because of the cheap electronics available there]. And we didn’t waste any time in extracting everything about Bangkok that he could tell us. What intrigued us the most was an area called Pahurat, which is supposedly a mini-India in Bangkok. Completely inhabited by Indians, it has everything Indian that comes to your mind – from Kiraana shops and dhabas to halwais and a Gurudwara!

And so, we turned our countryman into our guide. We got off with him and let him lead us to Pahurat through innumerable meandering streets cramped and crowded with markets of electronics and garments. Clearly, we were approaching the mini-India!

When we entered the Sikh temple, I had to hold my breath for a moment… It w 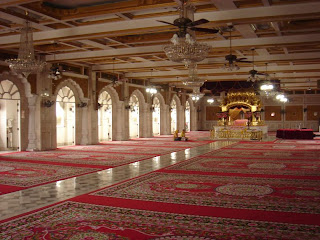 as just so magnificent! The huge expanse of the hall, the grand chandeliers, the artistic lighting and ventilation, and above all, the golden abode of Guru Granth Sahib ji were truly breathtaking. We sat there for a long time – silent, in direct communication with the Waheguru. I busied myself in clicking pictures after a while, but Mamma and Bua were not done with their prayers for quite some time.

Pretty pleased and deeply grateful to the Lord for having maneuvered our plans to come to him this way, we set out in search for food. And what better place for that than a Punjabi dhaba! I couldn’t eat anything of course, so I just had Lassi [although I have serious doubts that my doctor would have accepted THAT Lassi as liquid!]

All our attempts at shopping failed! Money, as I said, had to be saved. We did savour the totally Indian experience of bargaining in the markets, though. And after a long and tiring day spent at ‘home’ in a foreign land, finally, we reached our hotel by twilight.

Now, the ‘clear-bowel’ solution awaited me! You might want to ask me, why I am even mentioning something like that over here? Well, to underline the fact that no day can be Perfect in every way! That solution has been designed in such a way that once you have had it, you won’t feel like eating anything for days altogether anyway, forget about drinking! It was probably the worst-tasting thing I had ever had in my life, and even now, as I type this, I feel completely horrible inside my mouth! Thankfully, I only had to have half the bottle that day. The rest was for the next day.

The next day! – The last before the day everything would change, or at least, a lot would. Strangely, however, I felt no anxiety, no excitement, no joy, no sorrow, no fear, not even anticipation. If there is a state of no feeling whatsoever, I guess I’ve been there, although if you ask me how it FEELS, I don’t think I’ll be able to explain.
Posted by Gazal at 6:54 AM