This was the first time I was travelling to a foreign land. Ironically, the journey was bringing me home!

It was early morning on October 16, 2007 when we landed in Bangkok, and afternoon by the time we were able to come out of the airport! Mamma had to get a Visa on Arrival [Thailand is one of the few countries in the world which let you have that. It’s just for 15 days, though] because she had got her Passport on the very day of our Departure, so there was no time to get a Visa from the Thai Embassy in India. But Visa-on-Arrival turned out to be one of the most tedious processes, because her return ticket had been booked along with mine and Bua’s – for 3 weeks later. It took us the whole of morning and all our energy to get her ticket changed and the Visa issued.

Thereafter, came the Immigration section! Yes, yet again! When I gave my Passport to the lady at the counter there, she returned it saying – “Oh, you gave me someone else’s Passport!” I replied – “No, that’s mine” and she looked completely at a loss for words. After looking at the Passport for a while, she said – “But isn’t that a GUY?” I smiled and said – “That’s me!” For a split second, I saw an expression of absolute shock on her face, after which she started laughing like a mad woman. She went on and on and on and I feared she would never stop. In between this exercise of laughter and the activity of breathing, somewhere she mumbled, “I… thought… you were a… GIRL!”

The doctor’s driver was there to receive us. He drove us to Hotel Baan Siri Ra 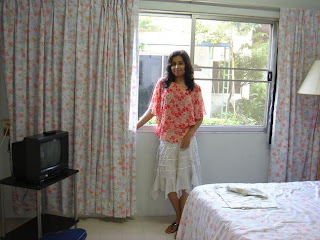 ma – the hotel where most patients of Dr. Chettawut stay. Dr. Chettawut was the guy who would amend nature’s mistake for me. We had opted for the little cottages in the hotel which came complete with a reasonably well-furnished kitchenette. All three of us are vegetarian and Thai food being predominantly meat-based, we knew we would have to do our own cooking for the forthcoming three weeks. We had also carried a lot of packed food from India, besides pulses and rice.

Having settled ourselves down, we bathed, ate and thanks to the fatigue, involuntarily fell asleep. I woke up pretty soon though. I was aching to dress up and for the first time ever, step out in the open without any worry or fear. Since there was still a level of discomfort between Mamma and me over my clothes, I’d rather get out while she was still asleep.

So, I crept out of the bed, changed into a spaghetti and a long skirt, applied oodles of kajal and without making a single noise, slipped out of the cottage.

There was a wonderful breeze outside, and it made me realize yet again that skirt is my favourite outfit! I attach a sense of freedom to the skirt, a sense of beauty and exhilaration that every woman has a birthright on. It’s the best outfit to dance in! And the best to feel free of all inhibitions and controls exercised on you for simply being a woman.

I walked the entire length of the long road twice. It felt amazing that not a single man or woman or child or dog re-looked at me with confusion! It felt liberating! I kept walking to assimilate this feeling for quite some time, and finally stopped when I spotted a cybercafé. The next hour was spent writing to friends and extended family and updating them all about everything being perfect at my end.

When I was entering the hotel, I saw Mamma and Bua coming out, looking rather worried. As soon as they spotted me, instant relief was spread across their faces. After their queries and my explanations, we started walking back towards our cottage to make preparations for dinner and chalk out the next day’s plan. And then, one of the two women walking beside me, said to me, “You look beautiful!”

It was my mother…